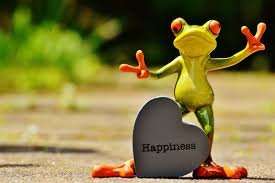 When you feel happy, what is usually happening is that the part of your brain responsible for generating emotions, generally called the limbic system, is guesstimating that whatever you just did, saw, smelled, or happened to you was good for you. This kind of neurochemicals induced happiness, for the time being, we will call chemical happiness. This is so that we can differentiate neurochemicals induced happiness from cognitive happiness which is an entirely different animal.

In scientific terms, happiness is the psychological state generated when our brain releases neurochemicals into our bloodstream in response to internal or external stimuli that our unconscious mind perceives as positive. Those butterflies in your stomach when you are in love, that heaviness in your chest when you are sad, all are the consequences of these neurochemicals. The main happiness-producing neurochemicals are dopamine, serotonin, oxytocin, and endorphins. The names of these chemicals are not important, at least not unless you are planning on studying neurochemistry. Chemical happiness however seductive and satisfying is momentary and ultimately fleeting. Neurochemicals induced Happiness or Chemical Happiness fades, and that is not an accident, your brain is designed to function that way.

People living an emotion-centric life guestimate what they “like” or what would give them the greatest chemical happiness, and then pursues that outcome or course of action. When you perform the action that you decided is good for you successfully, the brain’s reward mechanism triggers a release of happiness-inducing neurochemicals. Now as you perform this action more and more, the intensity of the chemical release from said action diminishes. This forces the individual to perform harder actions or pick a new course of action to achieve the same intensity of chemical happiness. This is similar to how the brain of a drug addict adapts to drugs and overtime loses sensitivity to the drug. The addict is then forced to increase the drug dosage continuously in order to keep achieving the same highs. This process of escalation whereby a person has to continuously do more and more to achieve the same dopamine high, lies at the root of much of the greed we see in society today.

For example, as the endorphin high a business person got at achieving his first million fades, it drives him towards acquiring the next 9, then another 90, then another 900 so on and so forth. A business person, a celebrity or any highly successful person, strives to recapture the endorphin high they received from their first triumph. The stresses they accrue from striving for ever greater success, however, weighs them down. The knowledge that any high achieved will fade, also lessens the impact of the reward, making any future rewards bittersweet. Over time, all the emotional complexes, the increased stress, and the fading endorphin releases lead to apathy and jadedness. If they are unable to stop themselves and continue to be driven by greed then in time they will resent the very world that gave them so much.

While the cycle of Desire/greed->strive->achieve/reward->fading of “happiness”->Strive-again or Desire-Greed cycle is bad for the individual’s personal wellbeing and the wellbeing of the world at large, but from a purely gene propagation perspective it makes perfect sense. At the end of the day, Genetic success at least in the short to medium term is all about how many babies you have, and how many babies they, in turn, have, so on and so forth. A person who has more material wealth can support more offspring, and offspring of wealthy individuals inherit their wealth and go on to have successful offspring of their own.

While short and medium term genetic success can be obtained through greed and selfishness, Long term genetic success requires cooperative competition between ever larger groups of people and not cut-throat competition. For all the conquerors and their genetic success, the endings of their dynasties were often as brutal as its beginnings. War is suffering at its height. The conquerors suffered, their children suffered, the world suffered and the progress and technology that could have prevented catastrophes like the black plague, which wiped out half of Europe’s population in the middle ages, was destroyed by invasions and wars. Could the knowledge contained in the ancient library of Alexandria have saved the lives of millions of Europeans had it not been burned down in the Roman invasion of Egypt? Maybe, Maybe not.

If we are to build a stable world where the human race is moving forward, most human beings are happy, and there is little to no suffering then we must recognize the problems with the sexual selection driven emotional conditioning of our brains. Our genetic conditioning drives us towards negative emotions such as greed, materialism, lust, and apathy more than they do to positive emotions like compassion, generosity, and loyalty. One of the ways, if not the only way to achieve a world where most human beings know true happiness and contentment is by switching from an emotion-centric way of living life to a logic-centric way of living life.